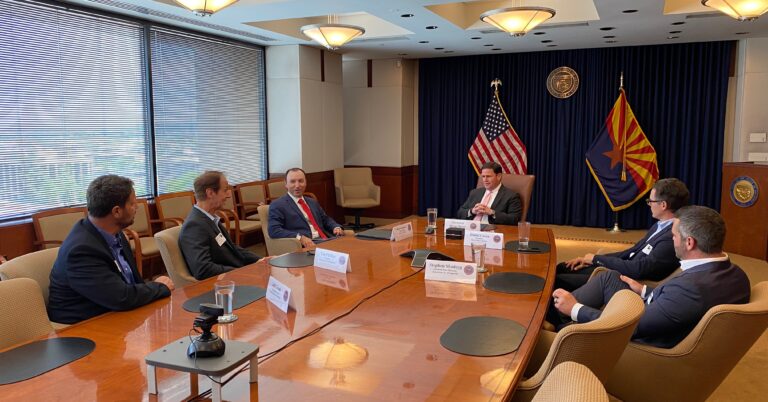 In November 2020, Arizona voters narrowly approved a ballot initiative, Proposition 208, that called for a 3.5 percent income tax surcharge on individual and small business taxpayers who earn more than $250,000 a year.

According to Americans for Prosperity – Arizona State Director Stephen Shadegg, there were two problems with this measure.

“There had been a need for tax reform in Arizona for years, but Proposition 208 focused lawmakers on the issue,” Shadegg said. “There were real concerns about how Arizona would continue to attract new businesses with this tax increase.”

The attention to the matter hardly guaranteed success. A narrowly divided statehouse and Senate meant a group of reform-minded lawmakers could not afford to lose any votes when it came time to pass the bill.

And the same forces, including local government employees, that supported the ballot initiative actively worked against reform.

Tax reform proponents needed a strong strategy that demonstrated the positive impact reform would have on all Arizonans, from small business owners to teachers to students.

‘This is your money’

As the budget surplus continued to grow (it is now expected to hit $4 billion in fiscal 2022), Shadegg and AFP-Arizona developed plans to advance tax reform.

“Our message to Arizonans was ‘this is your money,’” said Shadegg. “We also showed that while tax reform would be good for small businesses, it would not adversely impact teachers and students.”

In December 2020, AFP fielded an internal poll with yes. every kid that asked Arizonans their opinions about education and tax policy.

That survey indicated that, even in the context of schooling, residents were having second thoughts about the ballot initiative that was passed just one month earlier.

Shadegg and AFP-Arizona shared the results with state policymakers.

By February, state Rep. Ben Toma had written legislation to revamp the tax code and give revenues back to taxpayers.

The chances of passing a bill seemed remote, and there were legislative fits and starts. The statehouse rejected Toma’s original bill by one vote in early June, but AFP’s communications and grassroots drumbeat continued.

“We just kept asking ourselves, ‘How do we keep this alive? How can we be more creative?’” said Shadegg.

In March, AFP formally established a coalition of advocacy groups, including the Arizona Chamber of Commerce, that convened weekly strategy calls to advance tax reform.

The coalition began by contacting more than 119,000 residents that AFP-Arizona knew were engaged and interested in tax issues.

In May, those advocates were asked to contact state legislators. The effort resulted in 30,000 calls, 1,200 letters, and 300 postcards. 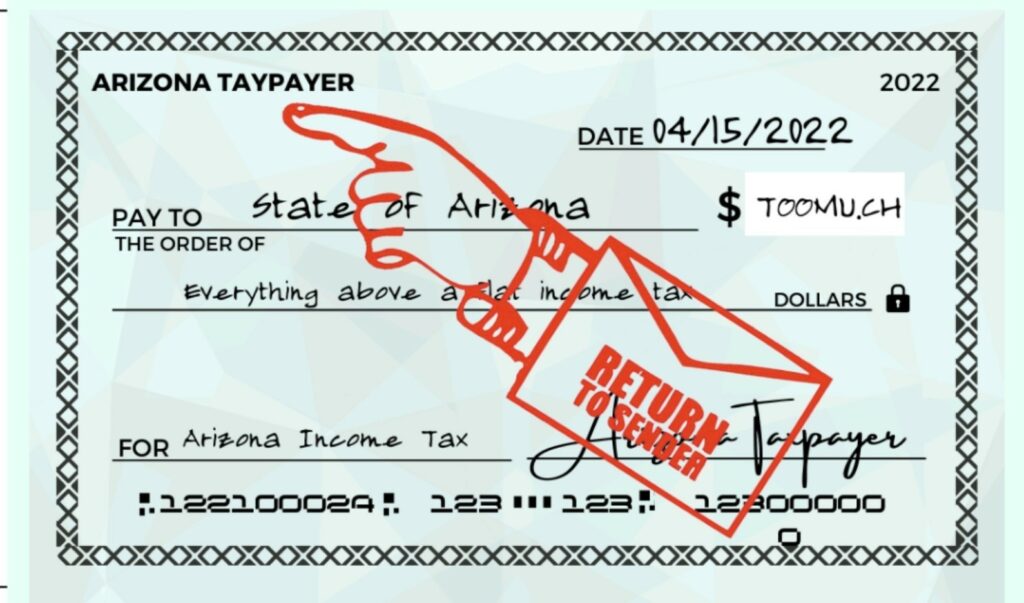 One of the mailers sent to Arizona residents to advocate tax reform.

Utilizing Facebook and its activist network, AFP-Arizona also launched a Small Business for Economic Opportunity Coalition that met with state lawmakers and shared information with other entrepreneurs.

Ducey regularly shared messages from coalition members on social media, including a statement from Shane Levinson, the CEO of Phoenix-based Carpets of Arizona and one of the coalitions’ key organizers:

“This tax cut will not only allow my employees to keep more of their money, but also gives us the ability to invest more into our people, bring on additional people, and continue to provide high quality products and services to more of our neighbors.” 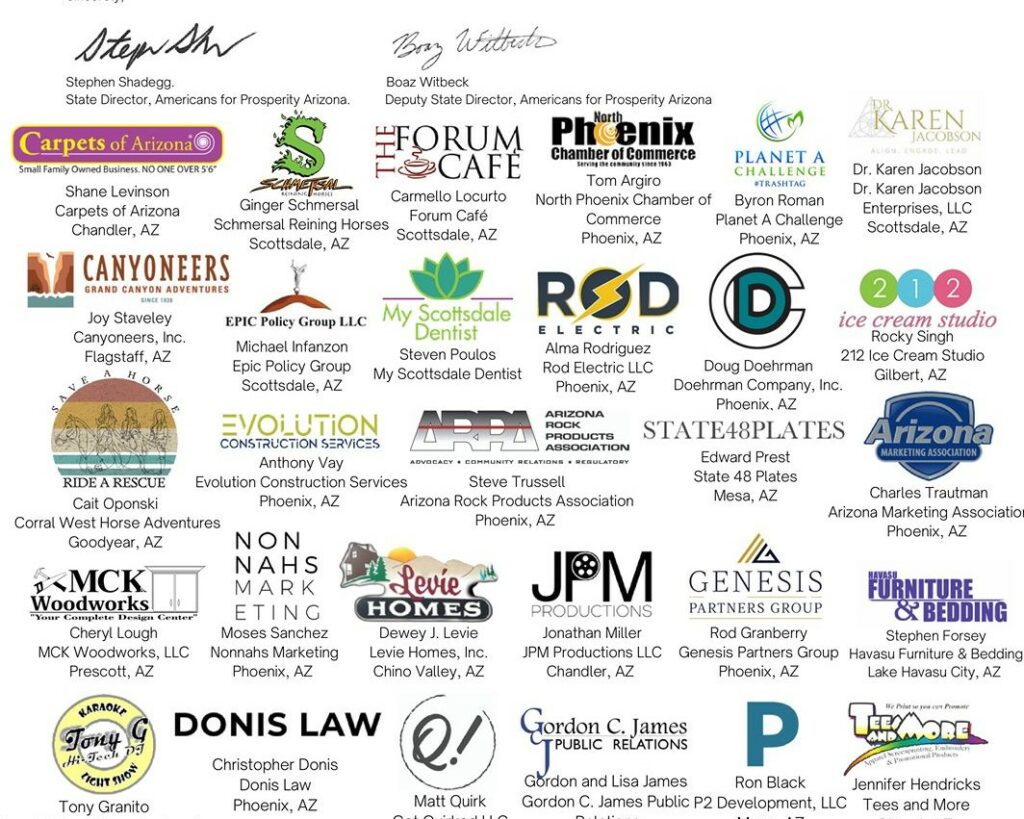 A sample of the more than 50 small businesses that signed a coalition letter urging lawmakers to pass tax reform.

In May, AFP-Arizona released the results of a survey of more than 600 registered voters. It found nearly two-thirds of Arizona voters felt it was time to reduce and flatten the state’s personal income tax. Lawmakers referenced the survey in committee deliberations.

The Phoenix Business Journal and other news outlets reported on it. AFP-Arizona’s six-figure advocacy efforts also included radio and digital ads, mailings, and earned media efforts. AFP President Tim Phillips even traveled to the state to meet with Gov. Ducey.

In Arizona, we’re committed to keeping taxes simple and fair. Thank you to @TimPhillipsAFP and the team at @AFPhq for meeting today to discuss tax reform and efforts to help Arizonans save their hard-earned money. @ArizonaAFP @LIBREinitiative pic.twitter.com/qG5VOkCs4Q

“We did everything we could to be effective,” said AFP’s Shadegg. “We knew we could not take a single tactic approach. We needed a diversity of voices and an equal level of pressure from every type of Arizonan.”

Veteran educator Cat Barrett was one of AFP-Arizona’s most vocal advocates. She said she joined the grassroot efforts because she understands how small businesses support schools and teachers in the Phoenix neighborhoods where she lives and teaches.

“Small businesses are the first to step up and donate when teachers need something for their classrooms,” said Barrett. “It doesn’t matter if it’s folders for homework or technology, they’ve never turned their backs.”

📫 A postcard mailing has taken place so that the taxpayers can identify & know who doesn’t want an increase in pay statewide. @PaulDBoyer @RepDavidCook It is time to return the money to the taxpayers, not leave it in the hands of the government. #Arizona #FlatTax #Taxpayers pic.twitter.com/8Uc0hZJZZU

Barrett told the story of one student who, during COVID-19, refused to use video during digital classroom meetings. Barrett contacted the student’s mother, who said her son was embarrassed because the family could not afford a haircut. A local barber stepped in to serve the student.

Barrett noted Arizona’s new tax reform law also provides additional incentives for individuals to give charitable organizations, including literacy programs, and will save veterans living in the state about $650 a year.

“Teachers want to be part of the solution,” said Barrett. “I think more of us are starting to question the business versus education mindset. We know that together we can solve things at the community level.”

The fight for small business isn’t over

Levinson, whose statement in support of tax reform was tweeted by Arizona’s governor, said tax reform already has helped him expand his business.

He ran the numbers after Ducey signed the legislation and determined that he could hire a full-time project manager.

He also ran the numbers for his 12 current employees and estimates the reform law will reduce their withholding from 3 percent to 2.5 percent.

Levinson, Barrett, and other advocates involved with AFP-Arizona have spent the weeks since  Ducey signed the bill thanking policymakers on social media. Reps. Shawna Bullock, Vince Leach, Ben Toma, and J.D. Mesnard also “stood in the line of fire” with AFP-Arizona and the thousands of Arizonans engaged in the grassroots efforts, Shadegg said.

Tax reform opponents also are not resting. They already are strategizing how to overturn the taxpayer gains, but, Shadegg said, “We’ll just keep fighting and getting creative.”

Are you thankful for our nation’s independence? How about being thankful for tax relief for all Arizonans? Click the link below to send a letter to the key lawmakers that made sure the people of Arizona can keep more of the money they earned: https://t.co/1Iu12OLXPk #ForArizonans pic.twitter.com/DgwDppZAZo

You can help prevent this historic tax reform from being overturned. Thanking the officials who stood up for Arizonans will let them know there’s a strong base of support for this achievement.