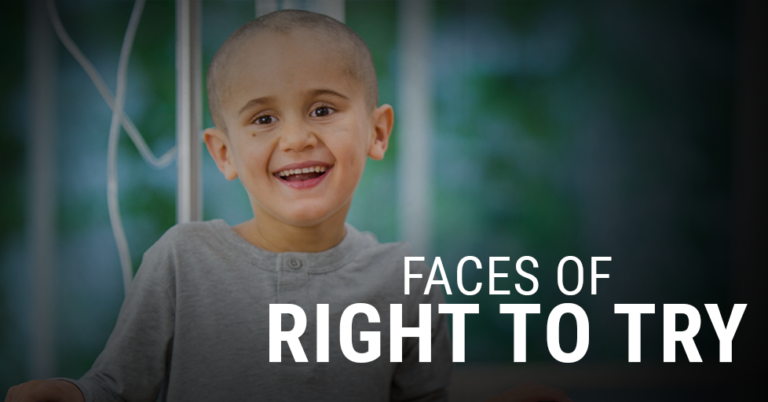 The Faces of Right-to-Try: Matthew Bellina

When President Donald Trump praised right-to-try legislation during the State of the Union, Pennsylvania resident Matthew Bellina was watching hopefully from the gallery. He knew that for him and countless other men and women, right-to-try could mean a second lease on life.

Bellina is a former Navy pilot and a proud father of three. He’s also battling ALS, a fatal disease that will slowly take away his ability to walk, move his arms, eat and even speak.

It took eight years after he started showing symptoms for Bellina to be officially diagnosed in 2014. By then, the illness had already progressed too far for one FDA-approved drug, but wasn’t advanced enough that the other approved drug would be effective.

Caught in the middle, Bellina is at the mercy of the FDA’s painfully slow approval process. Getting a new drug to market can take almost a decade.

Bellina doesn’t have that kind of time.

Desperate for a Second Chance

That’s why Bellina has become a vocal advocate for allowing terminally ill patients like him to access potentially lifesaving medications and treatments that haven’t received final FDA approval.

Bellina says right-to-try will help encourage drug companies to provide that access by removing potential repercussions for manufacturers if terminally ill patients suffer side effects or die while on the medication.

“It’s not that they are heartless and don’t want to, but they are afraid,” he told the Chicago Tribune last year. “The company could always say no, but this bill makes it a lot easier to say yes.”

For the Bellinas, the argument for right-to-try is obvious. “If I’m not going to make it anyway, why shouldn’t I get to try?” Bellina asked.

His wife Caitlin agrees. “Knowing that Matt can’t try experimental drugs when he has a terminal illness that’s going to kill him anyway is the dumbest thing ever.”

“It’s like a slap in the face, especially since he’s a veteran,” she said. “OK, so you wanted him to strap a rocket to his back and go fly to defend the country, but now, when it’s his turn and something is wrong with him, you are like, ‘yeah, sorry, it’s too dangerous for you to try that.’”

Bellina told the Goldwater Institute two drug companies said they are willing to treat him if right-to-try becomes law on the federal level. “I have had ALS too long to meet the inclusion criteria for any promising trials,” Bellina said. “A vote against this is essentially a vote to kill me. It is a vote to make my wife a widow and leave my boys fatherless.”

Fighting for His Family

Bellina has testified in front of Congress in support of right-to-try last year, and this year was a guest of Rep. Brian Fitzpatrick at the State of the Union.

He believes his fight for right-to-try isn’t just about the chance at a cure for himself—it’s for his family. During his testimony, he told lawmakers “I need to know before I die that if my children find themselves in this unenviable position, that this nation that I proudly served will respect their liberties and their right to make their own decisions about their medical treatments.”

In the meantime, he’s hoping that right-to-try will mean more time with his kids. He tells the story of how his five-year-old son made a wish on a dandelion that his dad would be able to live long enough to play a game of touch football with him.

If right-to-try passes, he’ll have a chance to fighting to make that wish come true.

Send an email to Congress leaders telling them it’s time to give terminally ill patients like Matthew Bellina another chance at treatment.