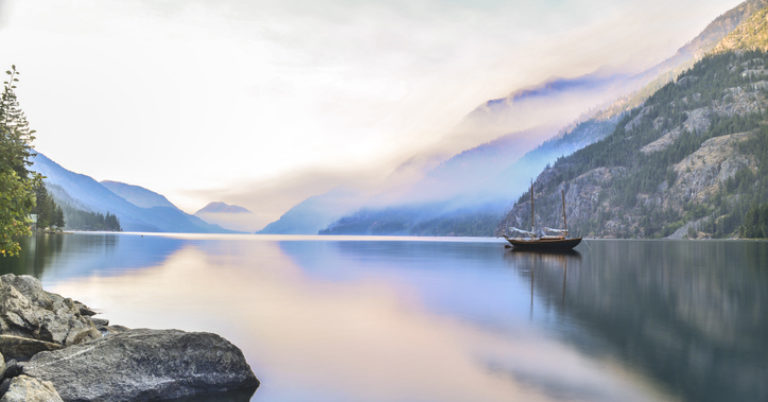 When Jim and Cliff Courtney sought to offer private boat transportation so customers could conveniently access their businesses — including Stehekin Valley Ranch, with cabins and a lodge house in the Lake Chelan National Recreation Area — the state of Washington denied their right to do so unless the Courtneys could prove the existing ferry service was not “adequate.”

Because the community of Stehekin is located at the end of 55-mile-long Lake Chelan and is accessible only by air, water, or on foot through the Cascades Mountains, unless Jim and Cliff could provide their own boat transportation, they and their customers were left at the mercy of the ferry service.

The Courtneys went to court, citing Section One of the Fourteenth Amendment, which states in part that “[n]o state shall make or enforce any law which shall abridge the privileges or immunities of citizens of the United States.” The Supreme Court addressed the meaning of the Fourteenth Amendment, just four years after it was ratified, in The Slaughter-House Cases, in which the Court identified the “right to use the navigable waters of the United States” as among the privileges and immunities of citizenship.

It is undisputed the Lake Chelan is a “navigable water of the United States.” Thus, like all other American citizens, the Courtneys have the right to use it.

But the U.S. Court of Appeals for the Ninth Circuit said “no,” holding that unless Congress first acted to regulate the lake, the Courtneys had no recourse against the state’s refusal to let them operate. The Ninth Circuit got the rule backwards. Nowhere does the amendment state that these privileges or immunities require Congress to act first before these rights exist.

On Monday, Americans for Prosperity’s sister organization, Americans for Prosperity Foundation, filed an amicus brief in the Supreme Court supporting Jim and Cliff Courtney and urging the Court to review the Ninth Circuit’s holding that unless and until Congress intervenes, the right of U.S. citizens to access the navigable waters of the United States will not be preserved.

The privileges and immunities of citizenship are rights that exist, period. No action by Congress is needed — just as no action by Congress is needed for citizens to have freedom of speech, the right to due process, or the right to petition the government for redress of grievances. The right to use the navigable waters of the United States is a fundamental right that predates not only the Fourteenth Amendment, but the Constitution.

By proclaiming that the Courtneys’ right to use the navigable waters of the United States required Congress to first regulate the lake, the Ninth Circuit not only violated the individual rights of Jim and Cliff Courtney, it misapprehended our constitutional structure in which all authority is inherent in the people and the government’s power is limited to authority that is delegated to it.

The Court should grant the petition and affirm the vigor of privileges and immunities of citizenship that exist autonomously and not as a result of Congress acting to bestow individual freedoms.