States and localities aren’t utilizing coronavirus bailout funds, despite demands for Congress to provide hundreds of billions of additional relief

More than 75 percent of Coronavirus Relief Fund dollars already in state and local government accounts are still unspent and more than $498 billion in lending authority from the Federal Reserve remains untapped.

This year, the federal government has already made nearly $2 trillion in assistance available to state and local governments. More than $1.1 trillion of that available aid is directly related to COVID-19.

The Coronavirus Relief Fund provided $150 billion to state and local governments to be used for “necessary expenditures incurred due to the public health emergency with respect to COVID-19,” through December 30, 2020, that were “not accounted for in the budget most recently approved.” This is an open-ended invitation for states to spend on new programs, projects, and activities on the backs of federal taxpayers.

According to a new oversight report from the Department of the Treasury Office of Inspector General, state and local governments have spent only $34 billion, or 22.8 percent of the $150 billion Coronavirus Relief Fund over the period covering March through June. 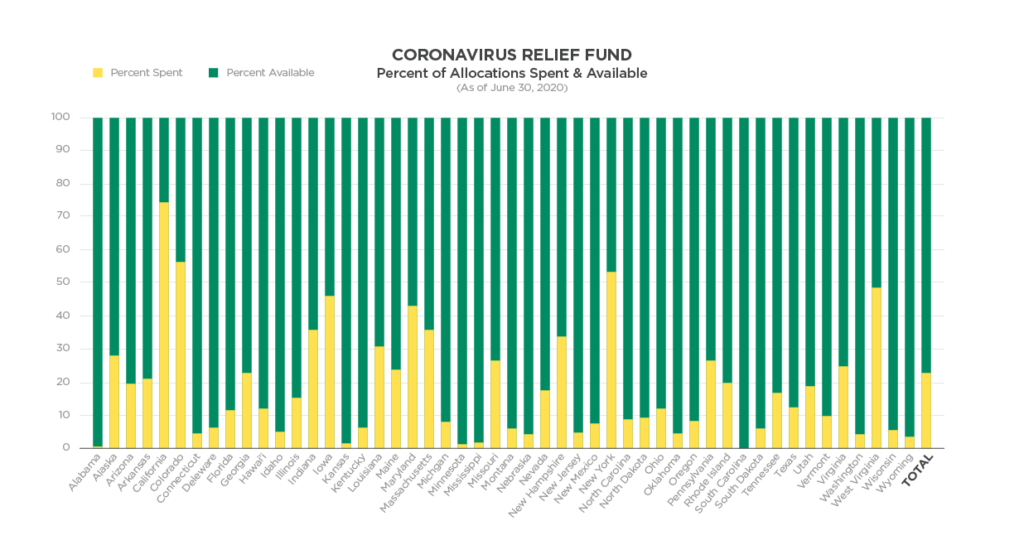 All told, state and local governments have more than $115 billion of taxpayer bailout funds sitting unused in their bank accounts. It would be irresponsible for Congress to rush to provide hundreds of billions more for state and local leaders that have so far proven unable to effectively and efficiently allocate what has been provided.

What’s more, we don’t yet even know how the $34 billion was spent. States are required to track and report this information, but it is not yet publicly available. Are funds being spent on important public health expenses, like testing and personal protective gear, or are they being spent on wasteful pet projects?

The Federal Reserve established the Municipal Liquidity Facility to purchase up to $500 billion in debt issued by state and local governments, backed by $35 from the Treasury under the CARES Act. This is the first time the Federal Reserve has engaged in the direct purchase of municipal bonds.

The Fed purchased $1.2 billion of BBB- rated debt issued by the state of Illinois at a 3.82 percent interest rate, a move which came after the state “put off a planned auction of such short-term debt as the interest rates demanded by investors soared amid concern it could be the first state to have its bonds cut to junk.” This purchase represents only .24 percent of the total liquidity available from the Municipal Liquidity Facility for state and local governments.

This facility can provide an emergency backstop to fill budgetary gaps. If state and local governments are unwilling to budget responsibly, and even if the bond markets are unwilling to lend, the Fed has provided a guaranteed line of credit. The fact that only one state has used the facility shows that additional bailouts are not needed.

Calls for more bailouts should be rejected

The national debt has surpassed $26.5 trillion, growing by more than $3 trillion since the CARES Act was signed into law. Even before the outbreak of COVID-19, the federal budget was on an unsustainable path.

Bailouts are an example of the federal government overstepping its authority. States should govern wisely and independently, both reaping the rewards of smart policy and addressing the consequences of bad fiscal management.

Rather than continuing to spend indiscriminately, Congress should focus on real priorities: suppressing the virus, getting people back to work, and preparing for the next crisis so we can emerge from this pandemic stronger than before.