LANSING, MI – Americans for Prosperity-Michigan (AFP-MI) activists gathered to drop off oversized postcards to Representatives Elissa Slotkin and Haley Stevens, urging them to oppose pork and bloat included in President Biden’s so-called “infrastructure” proposal. The postcards were signed by dozens of constituents in Representative Slotkin and Stevens’ districts.

“Given that President Biden’s proposal spends 95% on partisan pork and only 5% on roads and bridges, it seems like a stretch to call it an ‘infrastructure’ plan. Rep. Slotkin and Stevens’ constituents have a right to speak up and voice their opposition to wasteful Washington spending – and they should listen to their concerns.” 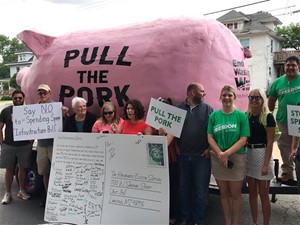 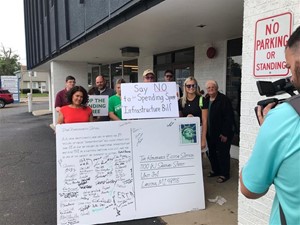 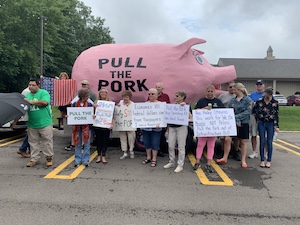 AFP-MI activists drop off the postcard to Representative Stevens’ office

Featured as part of AFP’s robust, seven-figure “Stop the Spending Spree” campaign, the group’s 10-foot-tall pig joined the events to highlight the need for Washington to “pull the pork” out of Washington’s spending bills. These were the eighth and ninth stops on a 20-stop tour around the state to highlight the pork and bloat included in President Biden’s so-called infrastructure proposal.

For further information or an interview, reach Nicole Tardif at NTardif@afphq.org.