“This new report shows that the Green New Deal style mandates will kill jobs and force West Virginia families to pay an extra $1,1000 a year.”

CHARLESTON, WV – Americans for Prosperity – West Virginia (AFP-VW) is launching a new advertising campaign that shows how the so-called clean energy standard in the Biden-Sanders reconciliation package would cause energy bills to increase $1,100 a year in the state. West Virginians have been proudly powering our nation for decades. We know that innovation is the best path to a better environment, not more of the same failed top-down government mandates represented by the Green New Deal style policies coming from D.C. politicians.

The ads highlight statistics from a Center of the American Experiment study that found the Clean Electricity Performance Program (CEPP) would cost $1,100 per customer every year through 2052.

AFP-WV is pushing out a digital campaign urging people to tell Congress to reject the plan. 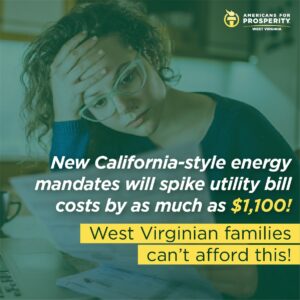 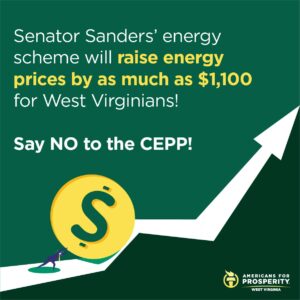 “Senator Joe Manchin said yesterday he wants to see how the Biden-Sanders’ spending spree will impact Americans. This new report shows that the Green New Deal style mandates will kill jobs and force West Virginia families to pay an extra $1,1000 a year. Higher utility bills affect everyone, but disproportionally hurt Mountain State families who are already struggling to make ends meet. AFP-WV is calling on all of our representatives in Washington to reject this absurd government takeover of American’s energy consumption.”