Once Brian Thompson saw the impact AFP-IN can make, he knew he wanted to join the team. He’s been an AFP activist for 1.5 years now, based in Fort Wayne, and has no plans to slow down.

“Fort Wayne is a great place where I think I can effect change,” Thompson said. “Once I became a Torchbearer with AFP, my focus has really been local.”

He attends all City Council meetings and has become a recognizable figure in the room. 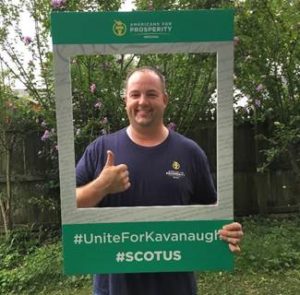 “They all know I’m there,” he said with a chuckle, “because I wear my AFP stuff and they all know who I am.”

But Thompson hasn’t disengaged from AFP’s national efforts — not by a longshot.

“I want to put judges back on the bench who actually rule and read from the Constitution — the way it’s meant to be — instead of trying to legislate from the bench.”

To achieve that, Thompson has participated in phone banks and door-knocking events in support of Judge Brett Kavanaugh’s confirmation to the U.S. Supreme Court. It’s fulfilling, he said, to be able to educate people on the confirmation process and why Judge Kavanaugh is a great fit for the high court. But there’s another part that’s just as fulfilling: “When you actually do get a patch-through.”

During phonebanks, it’s a great feeling when people agree to be put through to Sen. Joe Donnelly’s office to advocate for Judge Kavanaugh’s confirmation. Not every person will want to do that, Thompson said. But it’s important to stay positive.