HARRISBURG, Pa. – Americans for Prosperity-Pennsylvania (AFP-PA) on Friday announced a new effort to urge Pennsylvanians to vote against Conor Lamb in the special election for the 18th Congressional District on March 13th. The effort includes direct mail and grassroots activities that highlight Lamb’s agenda as having more in common with Nancy Pelosi than the values of southwest Pennsylvania. 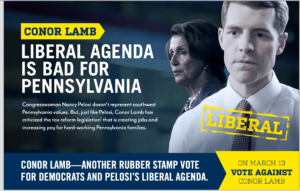 “We can’t afford Conor. A vote for Conor Lamb is a vote for Nancy Pelosi’s liberal agenda. Like Pelosi, Lamb has criticized the historic tax reform legislation that is already putting more money back into the pockets of hard-working Pennsylvanians.

Lamb Was Critical Of The Republican Tax Reform Package Claiming It Does Not Address The District’s Issues.