The federal government is on an unsustainable fiscal path – and that’s particularly true for federal spending, specifically. According to the Congressional Budget Office, the share of our overall economy consumed by Washington is set to keep growing as far as the eye can see, unless Congress and the president act: 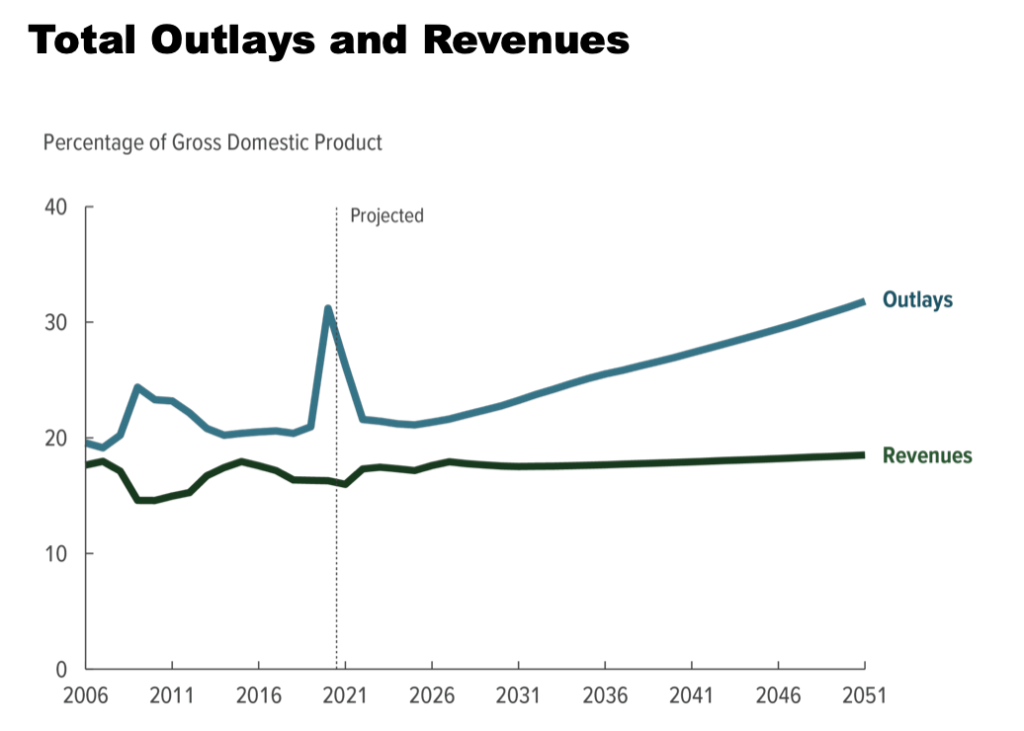 If government spends more of our national economic output every year, it will increasingly impoverish the private sector, limiting the resources available to hundreds of millions of Americans. That means less of our nation’s wealth goes to private sector salaries, investment, business formation, and activities that encourage future growth.

Constantly increasing taxes to try to keep up with this endless spending growth should not be an option.

Higher tax rates would take more and more money out of the pockets of American families. And experience suggests it wouldn’t work, as federal tax revenues have historically been very stable even with high income tax rates. So as government spending increases, federal debt is likely to grow higher and higher.

If we hope to limit that debt, grow the economy, and make Americans more prosperous, lawmakers must put a cap on federal spending.

The Maximizing American Prosperity (MAP) Act has been introduced by Representative Kevin Brady of Texas and Senator Mike Braun of Indiana to do just that. Starting in 2031, it would reduce Washington’s share of the economy to no more than 17.5 percent annually – equal to the 50-year average of federal tax revenues.

Americans for Prosperity recently joined with more than two dozen other leaders on fiscal issues on a letter in support of the MAP Act. The signers argue that:

Now more than ever, it is critical that legislators take a serious look at the fiscal situation we find ourselves in, with a budget deficit for Fiscal Year 2020 of $3.132 trillion and a projected share of the national debt held by the public of 102.3 percent of GDP. While markets continue to finance our debt in the current moment, the simple and unavoidable fact remains that our country is not immune from the basic economics of massive debt, that history tells us leads to inevitable crisis.

Increased levels of debt even before a resulting crisis slows economic activity — a phenomenon referred to as “debt drag” — which especially as we seek recovery from COVID-19 lockdowns, our nation cannot afford. This is particularly true when coupled with the systematic devaluation of our dollar that has only been exacerbated by the federal government’s response to COVID-19.

Read the full letter in support of the MAP Act.