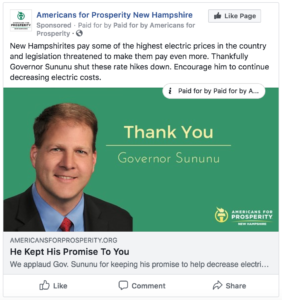 “Jacking up our electricity costs for ratepayers, to help out certain favored companies, is not the solution to providing the reliable and affordable energy our employers and families need. We applaud Governor Sununu for upholding his 10-year energy strategy and getting the government out of the practice of picking winners and losers in the marketplace,” said Greg Moore, AFP-NH State Director. “Handouts to specific industries and long-term subsidies do nothing to alleviate the high electric costs Granite Staters face and would only hinder our booming economy.

“This campaign is to let people know that Governor Sununu lived up to his promise to make New Hampshire more competitive and lower our electricity costs and to encourage him to keep doing so. Although there’s more to be done to ensure Granite Staters get the ratepayer relief they need, the governor’s leadership on this issue is setting our state on a better path.”

New Hampshire rate payers face some of the highest electric rates in the country. According to the U.S. Energy Information Administration, New Hampshire residents pay an average retail price of 19.40 cents per kilowatt hour, compared to a national average of 12.50 cents. Governor Sununu’s veto follows his 10-year energy strategy that focuses on allowing market forces to determine energy investments, rather than relying on costly subsidies that have been a key factor in the state’s high electricity prices.