St. Paul, MN – Americans for Prosperity-Minnesota (AFP-MN) on Wednesday announced a statewide digital ad campaign urging Minnesotans to support state tax reform. The ad directs Minnesotans to a digital tool that empowers them to contact their legislator and voice their support for getting tax reform passed.

The House and Senate each passed their own slightly different versions of a tax reform package, both of which AFP-MN supported. The two conflicting versions of the bill are currently being reconciled in conference committee. 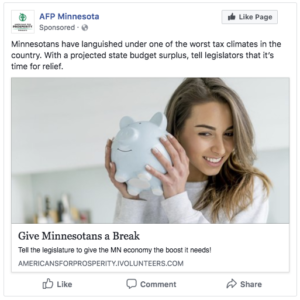 “After years of a stagnant economy, it’s time to reform our outdated tax code and put more money back in the pockets of hardworking Minnesota families. Reducing our state’s high tax burden will create more jobs and opportunities for all Minnesotans,” said Jason Flohrs, AFP-MN State Director. “State tax reform will be a welcome relief for taxpayers and offers a path forward for our economy and our state. We urge Minnesotans to voice their support for tax reform and help unleash our economy.”

Without specific action to address tax conformity issues, many Minnesotans would have faced significantly more complicated tax filing as well as unintended state tax increases as a result of the interaction with federal tax changes.

Both the House and Senate tax packages feature the first individual income tax rate reduction since 2000 and ensure Minnesota has more control over its tax code by altering the base Minnesota tax code calculation from federal taxable income to adjusted gross income.

For further information or an interview, reach Jason Flohrs at JFlohrs@afphq.org.