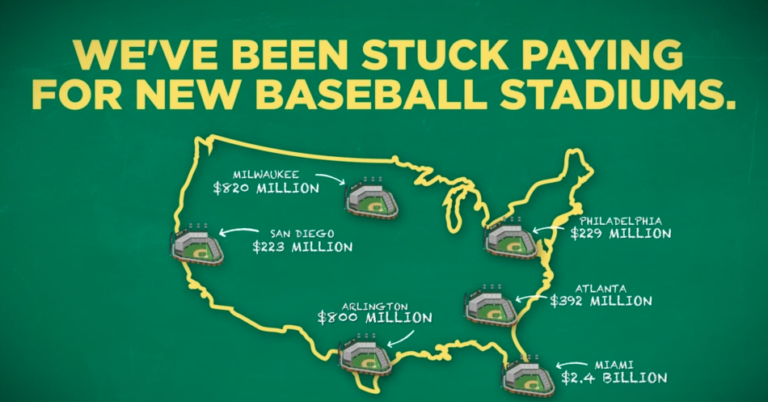 The 30-second spot shows recent examples of the billion-dollar boondoggles that pad the profits of professional sports clubs across the country at the expense of hard-working Americans. The video highlights how taxpayers in cities like Miami, Atlanta, New York and others are on the hook for billions in stadium subsidies. 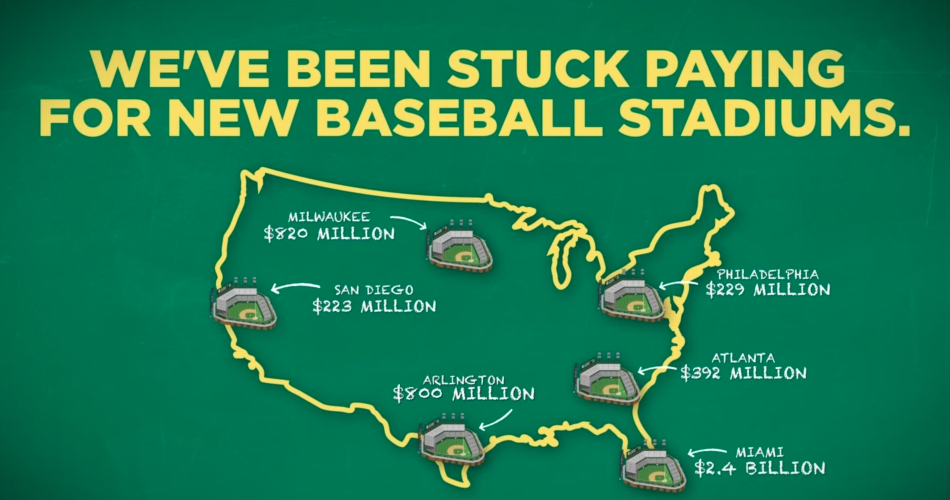 “Boosting the bottom line of professional sports teams is not a proper role of local, state, or federal government. Stadium subsidies are sold as an economic boon, but the data shows that the taxpayers footing the bill wind up getting shutout.

“Congress recently made strides towards simplifying the tax code and rejecting special carveouts and corporate welfare. It’s time for Congress and state and local governments to abandon one of the favorite pastimes of professional sports teams by eliminating these funding mechanisms that allow pro-sports teams to get rich off of taxpayers.”

In our…Brookings book, Sports, Jobs, and Taxes, we and 15 collaborators examine the local economic development argument from all angles: case studies of the effect of specific facilities, as well as comparisons among cities and even neighborhoods that have and have not sunk hundreds of millions of dollars into sports development. In every case, the conclusions are the same. A new sports facility has an extremely small (perhaps even negative) effect on overall economic activity and employment. No recent facility appears to have earned anything approaching a reasonable return on investment. No recent facility has been self-financing in terms of its impact on net tax revenues. Regardless of whether the unit of analysis is a local neighborhood, a city, or an entire metropolitan area, the economic benefits of sports facilities are de minimus.

According to Chris Hudson, director of AFP’s Florida operations, the group aims to draw a line in the sand as discussions continue between local government officials and the Rays to ensure no taxpayer money is used to woo the team from one side of the bay to the other.

So far, the commission has sent mixed messages about its willingness to use public money for a potential stadium in the Ybor City area. Early estimates for the stadium have put the cost somewhere in the $500 million to $650 million range.

According to a study by the Florida Office of Economic and Demographic Research, financial incentives from state government to professional sports teams only bring back 30 cents for each dollar given to the team. Amy Baker, chief economist for the Legislature, said the return is likely higher for local governments rather than the state, but it’s hardly a guarantee that the local government will break even.

Investigative reporter Noah Pransky points to the boondoggles in Miami that led to taxpayers being on the hook for over $1 billion that has not produced big crowds nor the revitalized neighborhood the team promised, the deal in Cincinnati that resulted in a local officials having to sell off a hospital to pay for their stadium deal, and how Atlanta’s new park has forced county officials to look at shutting down local libraries.

For further information or to set up an interview, reach Gabrielle Braud at gbraud@afphq.org.