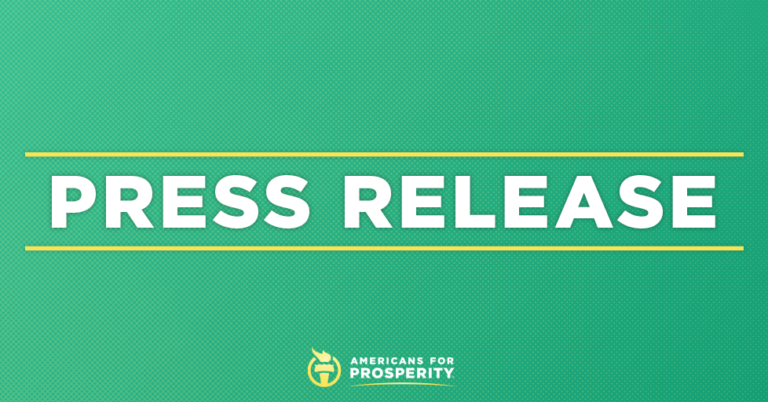 Arlington, Va. – Americans for Prosperity (AFP) launched a significant six-figure campaign to mobilize its grassroots activists against President Biden’s $1.9 trillion COVID package, which is packed with unnecessary spending for long-standing partisan priorities and will do nothing to end the pandemic or help the economy recover stronger – even as $1 trillion of earlier COVID assistance remains unspent. AFP believes any COVID relief spending should be timely, temporary, and targeted to those hit hardest by the pandemic.

AFP’s national campaign focuses on 10 key states and includes a robust direct mail, digital, and radio advertising campaign to supplement the work of its grassroots teams. The grassroots group recently sent a letter to the White House and Congress encouraging lawmakers to embrace an approach to COVID relief advanced by Sen. Collins and nine of her colleagues.

“More than $1 trillion of previous COVID assistance is still unspent, so why are President Biden, Majority Leader Schumer, and Speaker Pelosi asking for another $2 trillion? To bail out reckless state governments and insurance companies, double the cost of hiring workers for small businesses already struggling, and grow Washington’s control over your health care. This isn’t targeted relief – it’s a partisan wish list filled with outrageous spending for things that will do nothing to help us recover. Lawmakers should instead focus on targeted relief to those who need it while advancing policies that effectively defeat the virus and get people back to work safely.”

More than a trillion in pandemic money remains unspent. So why is President Biden pushing for another $2 trillion?

To double the cost of hiring workers for struggling small businesses, eliminating jobs.

This isn’t targeted relief to those who need it. It’s a partisan wish list that won’t help us recover.

Visit RejectBailouts.com. Tell Senator Lisa Murkowski to side with Alaskans and REJECT this partisan wish list.

AFP’s national campaign focuses on scaling its activists’ efforts in 10 states to urge their lawmakers to reject President Biden’s $1.9 trillion COVID package and instead support policies that would defeat the virus and help the economy recover stronger.

AFP has set up a unique web page at RejectBailouts.com that empowers individuals to contact their lawmakers and urge them to reject the so-called relief bill. The grassroots group will also launch targeted direct-mail, layered digital ads, radio advertisements, and other tactics beginning this week in the following states: Alaska, Arizona, Georgia, Louisiana, Maine, Mississippi, Ohio, New Hampshire, Utah, and West Virginia.

The grassroots group recently released its “Save Lives. Save Livelihoods. Recover Stronger” policy agenda to focus Congress and the Biden administration’s attention during the first 100 days on two of the biggest challenges facing Americans: ending the pandemic and helping the economy recover stronger. The agenda outlines a two-part plan to save lives with an “all-of-the-above” approach to addressing COVID-19 and save livelihoods by getting people back to work safely and getting the economy moving again. Doing both while preventing bad policy will put us on a path to recover stronger.