Arlington, VA – Americans for Prosperity (AFP) launched an ad campaign this week urging members of Congress to support two bipartisan amendments to the Foreign Intelligence Surveillance Act (FISA) that prohibit warrantless surveillance of Americans. The first, introduced by Sens. Ron Wyden and Steve Daines, would prevent the government from collecting internet search history or geolocation data without a warrant. The other, introduced by Sens. Mike Lee and Pat Leahy, would reduce the government’s surveillance abuses and require full transparency in its surveillance applications to the Foreign Intelligence Surveillance Court. Both amendments are set to be voted on as early as this week. 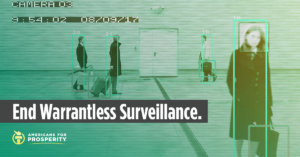 “As it currently stands, the Foreign Intelligence Surveillance Act threatens the privacy of every single American. Warrantless surveillance justified by FISA has completely disregarded the Fourth Amendment rights of law-abiding Americans and has not kept us safer. The bipartisan amendments proposed by Sens. Lee, Leahy, Wyden and Daines would take concrete steps toward restoring some of our most basic rights. Recognizing just how much our leaders are dealing with in the midst of this crisis, we applaud their work and urge every member to give this issue the attention it deserves.”