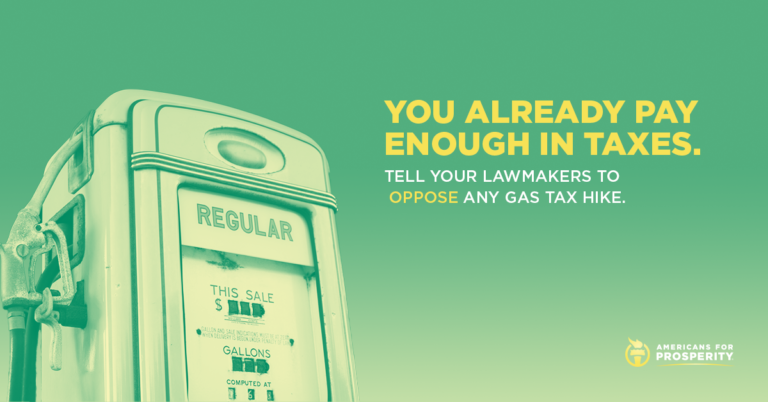 BATON ROUGE, La. – Americans for Prosperity-Louisiana (AFP-LA) on Tuesday is hosting their annual Day at the Capitol where volunteer activists are gathering to speak with their representatives on pressing issues, including the proposed state gas tax increase. The group has commissioned an airplane to fly around the Capitol with the message, “LA CAN’T AFFORD A GAS TAX TOO – AFP,” to raise awareness of the potential tax increase. The airplane will be flying around the capitol grounds from 11:30 AM – 1:30 PM.

The activists will hear a short speech by the chapter’s state director, John Kay, on why the group opposes a gas tax increase and how the state government can improve roads and bridges through smarter spending. State Treasurer John M. Schroder, Sr. will also be present to discuss capital outlay reform. Afterwards, the activists will speak with their representatives and share their concerns on the many issues being considered this legislative session.

Members of the press interested in speaking with an AFP activist may contact State Director John Kay to make arrangements.

“Over the past couple of years, we’ve educated and mobilized thousands of Louisianans to oppose a gas tax increase. Between now and the end of legislative session, we are prepared to directly contact 250,000 individuals to educate them on this tax increase. I think Senator Morrell put it best yesterday in the Revenue and Fiscal Affairs committee when he said that Louisianans don’t support a gas tax increase.

“It was a bad idea in 2017 and a worse idea in 2019 after legislators essentially turned the temporary sales tax increase into a permanent increase. Legislators should instead move DOTD funding into the general fund and explore private-public partnerships.”