NAPERVILLE, Ill. – Americans for Prosperity-Illinois (AFP-IL) on Monday launched a new digital ad and website calling on lawmakers to oppose scrapping Illinois’ constitutionally protected flat income tax for a graduated one. AFP-IL, the state’s leading free-market organization, has been at the forefront of fighting this anti-taxpayer agenda that would force a costly graduated income tax on taxpayers. 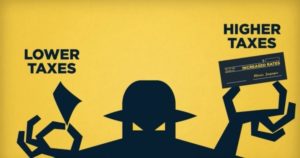 “If lawmakers scrap our constitutionally-protected flat income tax in exchange for a graduated income tax, they will have free rein to raise our taxes. The last thing Illinoisans need right now is a graduated income tax that will inevitably lead to higher taxes. Springfield has proven incapable of spending tax dollars wisely, so giving them a blank check is outrageous. Families throughout the state are scrambling for the exit, and amending the Constitution to allow for higher taxes will only make matters worse. We urge the legislature to ‘Keep Illinois Flat’ and reject the graduated income tax.”

The video highlights how scrapping the flat tax would give lawmakers more latitude to increases taxes on Illinoisans. The video urges Illinoisans to visit KeepIllinoisFlat.com to contact their lawmaker and tell them to oppose the graduated income tax.

“When politicians in Illinois have an opportunity to raise taxes, they take it – like when they hiked income taxes 32%,” the video states. “Our property taxes are some of the highest nationwide. Now some lawmakers want to scrap our constitutionally protected flat income tax and replace it with a graduated one. At any time, they can add brackets or increase rates. A blank check signed by you, the taxpayer. How do you think Springfield will use that power?”

AFP-IL has long championed keeping the flat tax. Most recently, AFP-IL State Director Andrew Nelms penned a Crain’s Chicago Business op-ed in March on the harms a graduated income tax would have on Illinois taxpayers and businesses.