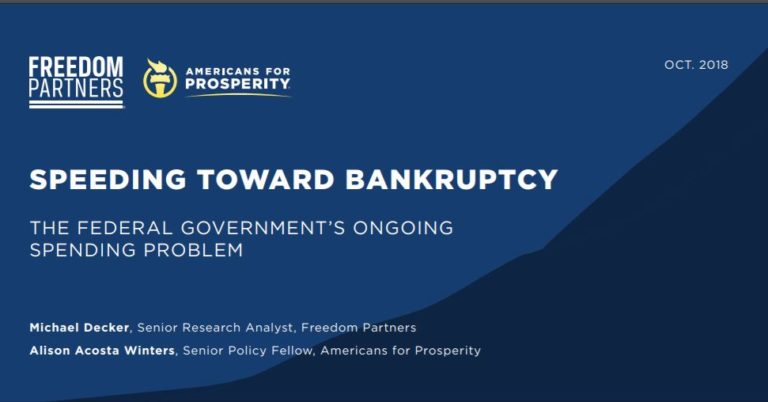 Analysis from the groups shows spending has chronically outpaced revenues.

ARLINGTON, Va. – Americans for Prosperity and Freedom Partners Chamber of Commerce released a long-term analysis of federal spending and revenues today, following the U.S. Department of Treasury’s FY18 annual report on the same subject. The organizations found that while both spending and revenues continue to increase, spending is clearly the driver of our budget problem.

The report examines the trajectory of both federal outlays and federal revenues over time both in cumulative changes over the baseline year.

For FY18 specifically, the report notes that the biggest drivers of spending increases were mandatory outlays, defense and debt service.  While revenues increased nearly $14 billion, these spending drivers helped add $129 billion to our spending tally. Taking a longer view, using 1989 as the baseline year, revenue collections have increased a whopping $19 trillion over those levels, but spending cumulatively increased by even more: $24 trillion. While there may be only a 0.2 percentage point gap in annual growth rates of spending and revenues over 30 years, the dollar amounts are huge, and it adds up all too quickly. Spending increases are simply outstripping those revenue bumps both in real terms and on a cumulative basis over the past few decades.

American for Prosperity Senior Policy Fellow Alison Winters had this to say:

“This report shows a clear historical pattern of spending growth outpacing revenue growth, a pattern that has accelerated over the past five years. Tax revenues will continue to grow, but future spending increases will dwarf past trends, largely driven by mandatory spending. It is time for Congress to pair its pro-growth tax reform with meaningful spending reforms that secure the future for our children and our grandchildren.”

“For Americans who are rightly concerned about overspending, this report makes clear the trend is not our friend. Washington does not have a revenue problem. It has a spending problem. Unless policymakers begin to take serious steps to rein in federal spending, the economic benefits of tax and regulatory reform will be submerged by this growing sea of red ink.”