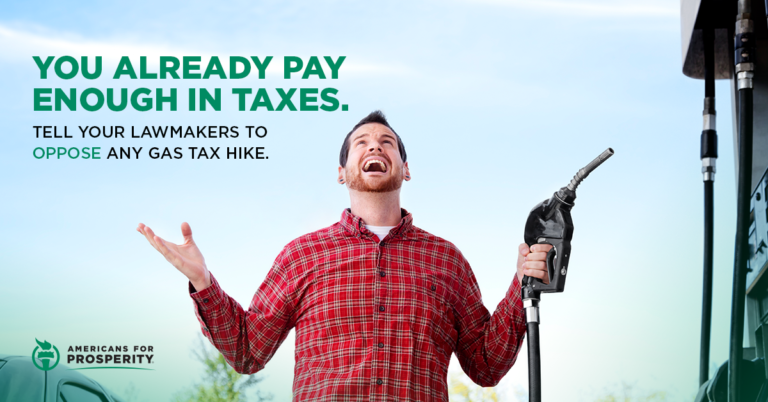 Arlington, VA – Americans for Prosperity (AFP) today launched a six-figure campaign advocating solutions for improving America’s infrastructure without imposing new burdens on consumers through a 25-cent per gallon gas tax hike, which would impact virtually every aspect of the economy. Coinciding with the launch of the campaign, AFP and Freedom Partners Chamber of Commerce is also releasing an updated state-by-state analysis of the real-life consequences that such a tax increase would have on people across the country.

According to the analysis, households across all fifty states would face hundreds of dollars in higher taxes at the gas pump. Notably, households in states like Wyoming, Texas, South Dakota, South Carolina, and Mississippi could see a new tax burden ranging on-average from $350 to $390 per year. Furthermore, the total state and federal tax burden would climb to over $1.00 per gallon in Pennsylvania, 96-cents in California, 92-cents in Washington, 87-cents in Hawaii, and 87-cents in New York.

“Before asking Americans to pay even more at the  gas pump, lawmakers should make what we currently raise go further, for example by stopping the diversion of gas tax funds to projects that have nothing to do with roads and bridges. Americans rely on a safe, modern federal highway system to travel to and from work, school, and visits with their families – and expect Congress to ensure these critical daily responsibilities remain affordable. Lawmakers must also consider the hard truth that increasing the gas tax would quickly undermine the benefits of tax reform by clawing back billions of dollars from low-and middle-income Americans at a time when they thought they were finally getting some relief.”

In addition to the re-release of the state-by-state report, AFP will launch digital ads across 20 states and in 30 congressional districts (click here for sample ad), encouraging lawmakers of the Senate Finance Committee, Senate Environment and Public Works Committee, House Ways and Means Committee, and House Transportation and Infrastructure Committee to oppose any efforts to increase the gas tax and instead prioritize key reforms that will improve our nation’s infrastructure, such as:

AFP has long maintained that there are better ways to address our nation’s infrastructure challenges than asking Americans to reach back into their pockets to funnel more money into a broken system. The economy is booming in large part due to the tax and regulatory reforms that Congress and the administration have implemented, and we urge them not to undermine that success by clawing back that tax relief at the gas pump.