Lansing, Mich. – Americans for Prosperity-Michigan (AFP-MI) is ramping up its efforts in the Michigan governor’s race with an unconventional flair—touring the state in a 25-foot-long moving truck wrapped with a photo of Gretchen Whitmer helping move boxes out of an abandoned warehouse. “Gretchen Whitmer’s Moving Co: The Wrong Move for Michigan,” the truck proclaims, highlighting a record of service that includes 440,900 jobs lost, the only state to lose population, 14.6% unemployment, and “tax hikes for everyone.”

“Gretchen Whitmer embraced policies that moved jobs and people out of our state,” said Pete Lund, state director of Americans for Prosperity-Michigan. “Gretchen Whitmer backed Governor Granholm’s policies that gave Michigan the dubious distinction of having the highest unemployment rate in the country and being the only state in the entire country to lose population.” 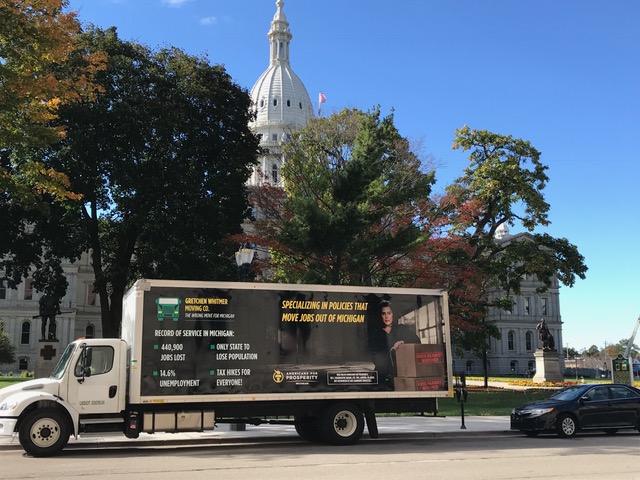 The moving truck parked in front of the Capitol yesterday and will head to more than 20 communities around the state before the November 6th election, including stops in metro Detroit, Grand Rapids, Midland, Kalamazoo, Flint and more. Grassroots activity such as door-knocking and phone banks, will be a component of many of the stops, the group says.

In addition to the tour, AFP-MI has engaged in paid anti-Whitmer ads which critique Whitmer’s past support of Governor Granholm’s tax hikes.