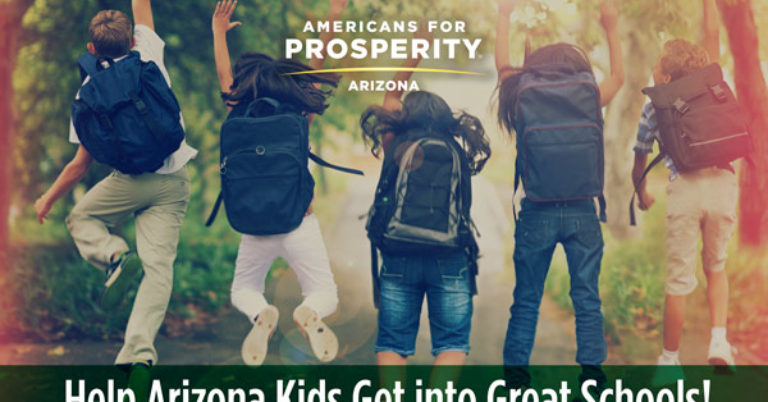 I’m doing an informal poll of our activists to find out how you feel about Governor Doug Ducey’s plan to raise teacher pay in Arizona 20 percent by 2020.  His plan is to pay for the raises out of (optimistic) revenue increases from economic growth, and by squeezing other state spending, without raising tax rates.

To take the poll, send me an email at tjenney@afphq.org with the subject line “poll” and include any of the letters below (A, B, C, D and/or F), as well as any comments you have.

A)  The 20-percent pay hike is a bad idea.  At $9,600 per student per year, there is already plenty of money in our school system.  But the school districts have failed for years to allocate funds to classroom teachers, by wasting money on administration and facilities.  Even so, the average Arizona teacher makes a salary of $48,000, with benefits taking total compensation to about $60,000. Really good teachers may deserve to get big raises, but bad teachers need to be fired.  And let’s get rid of the union pay scale that pays good, mediocre and bad teachers the same if they have been teaching for the same number of years.

B)   If the Legislature is going to raise teacher pay by 20 percent, that should be accomplished by mandating that school districts reallocate available resources to classrooms by downsizing administration and non-teaching staff, and selling off unproductive facilities (for example: some of our districts have overbuilt and now have seats that are half empty). As it is, there are wide differences in how much school districts pay their teachers, even if they have the same revenue per student.

C)   If the Legislature is going to have to cut other areas of state spending to raise teacher pay by 20 percent, education reformers should at least get something good in the bargain, such as preservation of last year’s expansion of school-choice empowerment scholarship accounts (ESAs), which is currently threatened by the presence of Prop 305 on the November ballot.

D)   If the Legislature is tempted to raise the state sales tax by one cent (over a billion dollars a year) to pay for the 20-percent teacher pay raise, then education reformers should get a bunch of good reforms in the bargain. For starters, the ESA expansion should be protected, without caps on enrollment growth.  We must also have fundamental reforms of school district finances, so that districts no longer have captive property taxpayers and must compete for all of their revenues by attracting students, a concept known as backpack funding.

F)   Yes, the Legislature should raise state taxes by at least a billion dollars a year to throw at the current district school system, bending over backwards in a fruitless attempt to satisfy the ever-escalating demands of the teacher unions and the district bureaucrats.