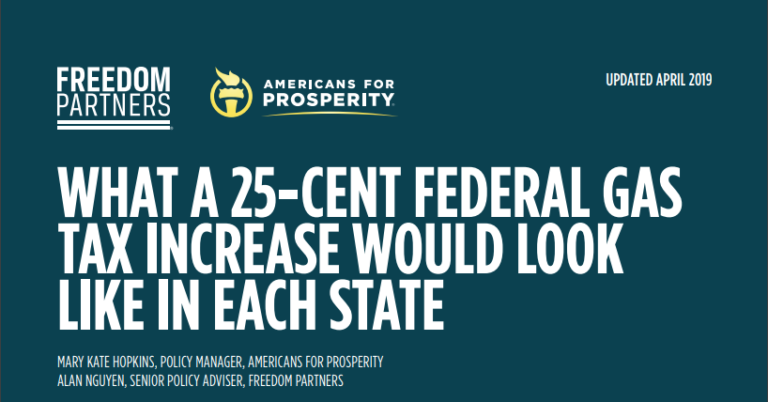 DALLAS, Texas – Americans for Prosperity and Freedom Partners Chamber of Commerce released an updated state-by-state analysis of the impact a 25-cent per gallon federal gas tax hike would have on Americans and virtually every aspect of the economy. According to the report, households across all fifty states would face hundreds of dollars in higher taxes at the pump. Notably, Texans would face a new tax burden of $369 per year.

The report is part of AFP’s campaign to educate and encourage lawmakers to implement solutions to improve the country’s infrastructure without imposing additional tax burdens on consumers.

“Lawmakers need to make it easier, not harder for Texas families to make ends meet. Instead of asking Texans to pay more at the pump, we encourage our representatives in Washington to make some tough choices and focus on targeting transportation dollars toward critical road projects and reforming outdated and costly regulations,” said Americans for Prosperity-Texas State Director Jerome Greener. “There are better ways to address our infrastructure challenges without burdening families with more taxes.”

In addition to the report, the grassroots group will launch digital ads encouraging Reps. Colin Allred and Kenny Marchant, as well as Sen. John Cornyn, who serve on influential committees that would oversee an infrastructure package, to oppose any efforts to increase the gas tax and instead prioritize key reforms that will improve our nation’s infrastructure such as: