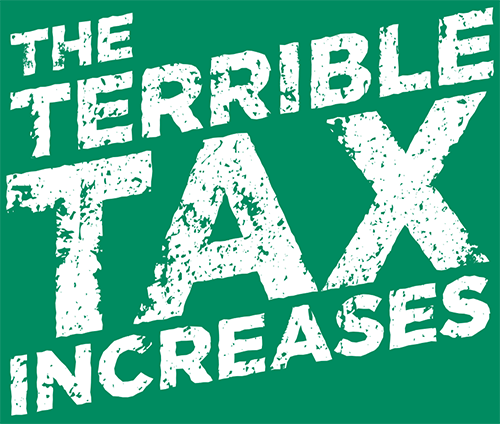 Tax hikes are terrible — and Utahns know it. They force people to hand over more of their hard-earned money, hurting Utah families in the short-term and the long-term.

We have two terrible tax increases on the ballot this year. Learn the truth about what Question 1 and Proposition 3 mean for you and your family before you vote.

Vote NO on these TERRIBLE tax increases!

The Truth About Medicaid Expansion: Proposition 3

Proposition 3 is simply an expansion of Obamacare that will give the federal government further control over our health care decisions, taking power away from patients and their doctors.

Under Obamacare’s Medicaid expansion rules, states are unable to protect taxpayers and patients by limiting enrollment to those who are truly in need. As enrollment exceeds estimates, Utah taxpayers will be forced to foot the bill while patients are stuck in an overcrowded system.

Making matters worse, Prop 3 is expensive. The cost, per-person, of expanding Obamacare has exceeded original estimates by 76 percent.1 In fact, states that expanded Obamacare have signed up more than twice as many able-bodied adults as promised. This enrollment explosion, combined with higher costs, has cost taxpayers 157 percent more than expected.2 In Arizona, charges in emergency departments alone increased more than 300 percent. In California, enrollment exceeded projections by more than 320 percent. In Colorado, Kentucky, Maryland and Washington, enrollment has exceeded projections by more than 100 percent.

The original cost of the state’s portion of expansion will be $90 million of your hard-earned money, but this is projected to grow exponentially over the next few years.

If Prop 3 passes, ObamaCare expansion’s enrollment explosion will put Utah taxpayers on the hook for more than twice as many adults as expected, crowding out funding for the truly needy and other critical budget priorities.

Nearly 650,000 individuals are stuck on Medicaid waiting lists nationwide. If Utah passes Prop 3, there would be more of our truly needy and vulnerable trapped waiting for care they desperately need. That isn’t the Utah way!

Pre-Obamacare, total Medicaid spending had already more than doubled since 2000, with states spending $1 out of every $3 on Medicaid.

If Utah passes Prop 3, it will allow hospitals to increase prices on all payers, with no transparency or accountability to the taxpayers who are footing the bill.

ObamaCare created a new welfare trap for more than 12 million able-bodied adults. An estimated 6.8 million ObamaCare expansion enrollees are not working at all.

Prop 3 would not only harm our wallets, but it would also harm those who need affordable healthcare the most.

That is not the Utah way! Vote NO on Proposition 3.

Gas Tax Hike: Why Question 1 Is Bad for Utah Families

Question 1 would increase the gas tax by another 10 cents per gallon—only one year after the legislature just increased our gas tax!

Some say we need additional revenues to fund education. But Utah has a more than $500 million surplus on the books.3 And we already spend more on education as a percentage of our budget than any other state in the country.4 In fact, the state legislature has allocated $1.2 billion in additional funds to education over the last 3 years.5 The Utah legislature should work with the money it is already bringing in and focus more existing education dollars on classroom spending.

Our teachers and students deserve better.

We need to make sure existing education dollars are spent wisely.  It was recently discovered that one school district paid for a nearly $1 million dollar house for its superintendent, in addition to the same administrator being the highest paid superintendent in Utah.6, 7

A gas tax hike won’t fix anything long-term, if wasteful spending is not addressed. Utah doesn’t have a revenue problem — it has a spending problem.

Utah families should not fork over more money for yet another gas tax. Our gas prices are already 30 cents higher than the national average — we have the sixth-highest prices in the country!

Lawmakers should look at more efficient ways to allocate resources we already have. Taxpayers deserve greater transparency and accountability.