LINCOLN, NE – Americans for Prosperity-Nebraska (AFP-NE) today announced the launch of a digital advertisement campaign thanking Senator Sasse for sponsoring bipartisan legislation that would give Congress a vote on certain tariffs proposed by a president before they can take effect. AFP has endorsed S. 287, the Bicameral Congressional Trade Authority Act, and launched online ads to both thank eight original bill sponsors and to encourage specific senators and representatives to cosponsor the legislation.

View the thank you ad here. 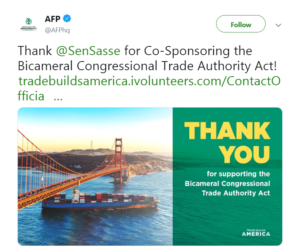 “Agriculture is the backbone of our state’s economy and tariffs continue to hurt one of our state’s most important industries. Not only are tariffs a tax that punish consumers with higher prices and disrupt employer supply chains, but they undermine what our farmers do best – help meet global demand for our agricultural products. We thank Senator Sasse for standing up for his constituents and opposing these barriers to economic growth. AFP-NE urges Senator Sasse to continue fighting to remove all trade barriers and pursue free, American trade that benefits the most Americans with a better economy, better jobs, and lower prices.”