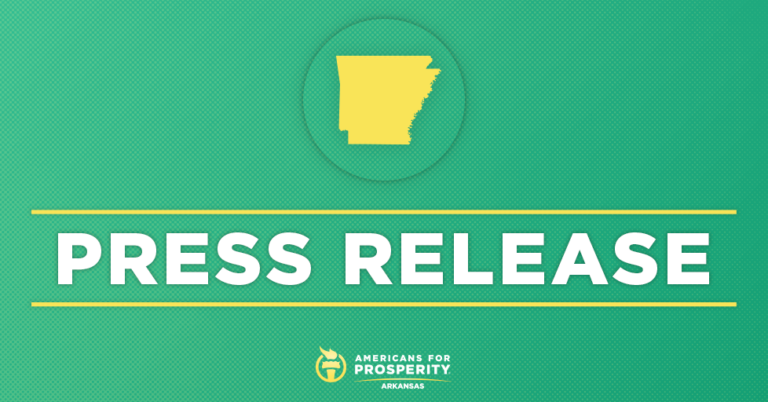 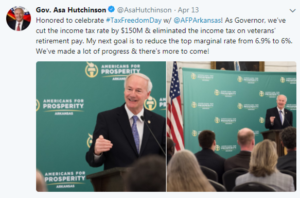 You can view the full video here.

During the rally, Gov. Hutchinson stressed how far Arkansas has come on the tax debate, stating,

Today, we are having the right debate. I don’t know anybody here in Arkansas talking about tax increases [for general revenue in our state]. The debate is how much to cut taxes by and what taxes to cut.

Gov. Hutchinson continued, highlighting that the $150 million in income tax cuts marks the first time Arkansas has rolled back income taxes in its history.

Gov. Hutchinson then elaborated on the importance of the Arkansas Tax Reform tax force and the careful study and elimination of extraneous exemptions, stating:

You can view the video from their post-rally discussion here.

Our [task force’s] purpose is to reform the tax code to make it simpler, fairer and easier to administer. It was also created with the same legislation to cut $50 million from income taxes in Arkansas…so, part of our objective is not just reform, but to recommend tax cuts and additional tax relief.

[Our tax force] has done a good job of weeding out a lot of information on how Arkansas compares to other states on exemptions, in sales tax and income tax, and I look forward to continuing [our work].

On the topic of learning from other states’ tax reform policies, Rep. Jean noted that Arkansas wasn’t going to make the same mistakes as Louisiana and Kansas, states that cut taxes but failed to make “proper spending side cuts” and eliminate exemptions.

We need to see what good [the exemption] does, whether it creates jobs and makes our state more competitive or was it just created by a legislator long ago who didn’t want to pay taxes for certain business.

We’ve narrowed our list of sales tax exemptions down to forty-three, but when you realize we’ve got over a billion dollars-worth of exemptions you can see why it’s so significant and controversial.

It’s important for AFP to educate people. What constitutes a good government is that taxes are broad, fair and reasonable. We need to see how Arkansas compares to other states. My goal and the governor’s goal is to drop the income tax and to make us more competitive with surrounding states We [also] need exemption [cuts] and spending cuts to get the income tax down.

In the months ahead, Americans for Prosperity – Arkansas leaders and grassroots activists will continue to work with lawmakers in Little Rock as we continue our efforts to reform Arkansas’ tax code and make it fairer and more competitive.