BRIGHTON, MI — On Saturday, Americans for Prosperity – Michigan (AFP-MI) joined chapters across the country in hosting a day of action in Brighton, MI — rallying grassroots activists against the Biden administration’s $4.7 trillion in spending proposals.

AFP-MI volunteers spoke with hundreds of small business owners about how the spending proposals would hurt Michigan families and small businesses. State Senator Lana Theis spoke at the event.

“Many Michigan small businesses were deeply impacted by the pandemic and the last thing they need is Washington imposing historic tax hikes and spending trillions we can’t afford. The Biden administration’s reckless $4.7 trillion spending spree is exactly the wrong move at the wrong time. We strongly oppose these packages that will slow down the economy and make life more expensive for Michigan families.” 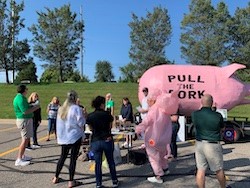 AFP-MI was joined by Mr. Perks, the 7-foot tall pig. 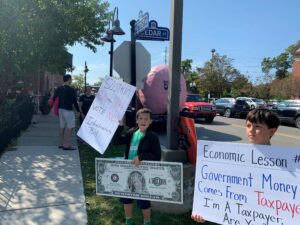 Brighton is in Representative Elissa Slotkin’s district. AFP-MI has been targeting Rep. Slotkin, encouraging her to oppose the ‘infrastructure’ proposals.