ARLINGTON, VA – Americans for Prosperity (AFP) today announced the launch of a new, digital advertisement campaign urging U.S. Senator Mike Enzi to support S. 287, the Bicameral Congressional Trade Authority Act, which would give Congress a vote on certain tariffs proposed by a president before they can take effect. AFP has endorsed S. 287, the Bicameral Congressional Trade Authority Act, and launched online ads to both thank eight original bill sponsors and to encourage specific senators and representatives to cosponsor the legislation. 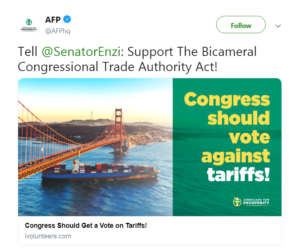 “Trade barriers like tariffs stifle innovation and harm workers, consumers, and taxpayers. This bipartisan bill presents a great opportunity for Senator Enzi to ensure we don’t slam the brakes on economic growth and restore the legislative branch’s constitutional authority over tariffs. We urge Senator Enzi to support this crucial bill and protect his constituents from these harmful tax hikes.”