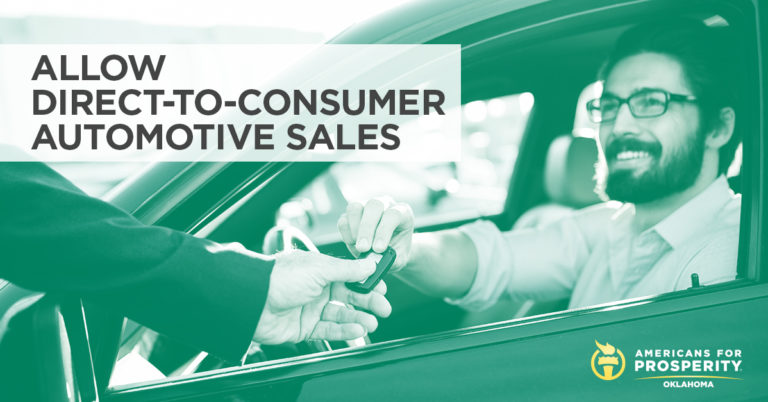 Oklahoma is projected to face a $167 million budget shortfall next year. We believe solving this deficit shouldn’t burden hardworking Oklahomans more than they already are. Better budgeting and cutting spending by our bloated government would go a long way toward resolving this deficit and set Oklahoma on a more sustainable path. Bringing our bottom line down, without raising taxes, means Sooner State taxpayers aren’t slapped with the bill for getting our fiscal house in order.

Additionally, we have an opportunity to inject almost $60 million into state coffers without raising taxes. Even if we don’t cut spending and require responsible budgeting, this would reduce our deficit by more than a third, bringing the shortfall down to just over $100 million. Still nothing to celebrate, but definitely movement in the right direction—and not at Oklahomans’ expense.

A bill in the Senate, SB 1560, would modernize outdated sales practices, spur competition and consumer choice in the free market, and take advantage of restrictive laws elsewhere to pump roughly $60 million in new revenue into our budget over two years. The bill would allow automotive manufacturers to sell directly to consumers in Oklahoma.

Much like you can purchase a MacBook or Surface from the Apple or Microsoft store, respectively, this bill would allow you to cut out the traditional dealership “middleman” and buy directly from the company making the car. Further, getting rid of the outdated laws that restrict this practice in Oklahoma will bring people from neighboring states looking to make use of our new system, meaning their dollars are spent in Oklahoma.

Some will argue the current system is superior and presents a benefit to consumers. Great, let’s let the consumer decide. That is the fundamental tenet of the free-market system. Additionally, if it is superior, then it doesn’t require the antiquated protections it currently enjoys.

We believe that the choice on how and where you can or should buy a vehicle is yours. Why is the government forcing your hand on the issue? Especially when that government is $167 million upside down and continues raising taxes to fuel its reckless spending habits.

Why don’t we return some power back to you, the citizen, the consumer, the taxpayer, and put a dent in our budgetary woes at the same time?

House and Senate leaders should realize the merits of SB1560 and pass it.