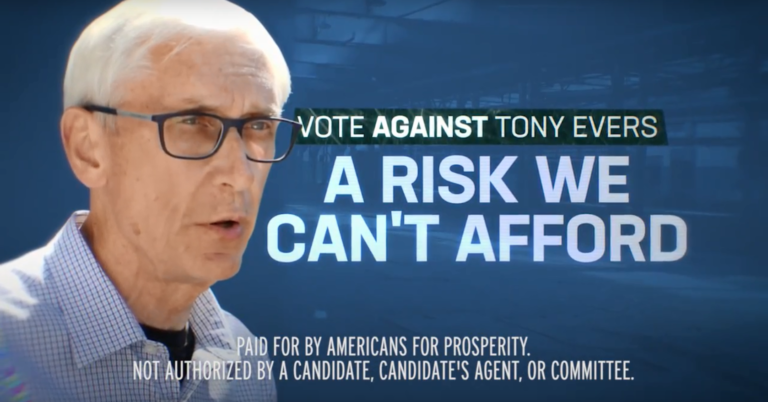 MADISON, Wis. – Americans for Prosperity-Wisconsin (AFP-WI) on Wednesday announced a new $1.5 million ad buy to supplement its grassroots’ efforts urging Wisconsinites to vote against Tony Evers in the race for governor. The new spot highlights the risk Evers’ policies pose to the strong economic gains Wisconsinites have enjoyed under Gov. Walker’s watch. The ad calls attention to Evers’ openness to higher property taxes, higher income taxes, and a dollar per gallon gas tax hike. The seven-figure ad buy is AFP-WI’s third television ad opposing Evers and will run on cable, broadcast, and digital platforms throughout the state.

“Thanks to Gov. Scott Walker and his policies, Wisconsin’s economy is booming. Tony Evers would take us in a very different direction, toward higher taxes that would jeopardize our economic gains and leave the future of Wisconsin uncertain. Tony Evers is a risk we can’t afford, and we urge Wisconsinites to vote against him this November.”

We all remember Wisconsin a decade ago.

Now, Tony Evers thinks it’s time to risk it all. His plan? It could cost us.

How much is too much for Tony Evers? We don’t know, because he won’t say.

Tony Evers, a risk we can’t afford to take.

Evers’ Education Proposal Calls For Eliminating Wisconsin’s Property Tax Credits That Total About $1 Billion A Year. “Evers is calling for an increase in total aid of more than $2.6 billion over the current biennium. His proposal also calls for, starting in the second year, eliminating property tax credits that total about $1 billion per year and shifting it to general aid.” (Kelly Meyerhofer, “Tony Evers Calls For Nearly $1.7 Billion Hike In State Funding For K-12 Schools,” Wisconsin State Journal, 9/16/18)

Evers’ Spokesman At The Department Of Public Instruction Framed His Proposal As “Property-Tax Neutral” But Admitted That The Plan Could Cause Taxes To Increase In Districts With Higher Property Wealth.“[Department of Public Instruction spokesman Tom] McCarthy called the overall proposal ‘property-tax neutral,’ but said changes like those could cause districts with higher property wealth to see taxes go up while the opposite would play out in lower property wealth districts. ‘That is a potentiality of changing a funding formula,’ McCarthy said.” (Kelly Meyerhofer, “Tony Evers Calls For Nearly $1.7 Billion Hike In State Funding For K-12 Schools,” Wisconsin State Journal, 9/16/18)

Evers Is Open To Gas Tax Hikes. Even A Dollar More Per Gallon.

Evers Did Not Reject The Idea Of A $1 Increase In The Gas Tax, Saying That He “Would Support Looking At Anything” And That “Everything Is On The Table.” “At a stop outside Mickies Dairy Bar in Madison, Evers didn’t say how much he was willing to raise the gas tax and didn’t reject the idea of a $1 increase. ‘I would support looking at anything,’ Evers said. ‘Whether it’s removing tax credits, whether it’s slimming down state government, whether it’s gas taxes. Everything is on the table. All I know is what he’s done has failed.’” (Patrick Marley And Molly Beck, “Scott Walker Touts Tax Breaks As He And Tony Evers Joust Over Road Funding,” Journal Sentinel, 8/15/18)