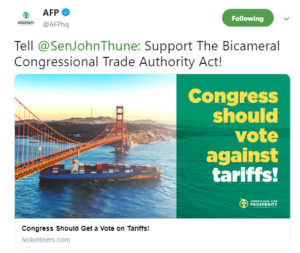 “Tariffs continue to have a detrimental impact on South Dakotans and our nation’s economy. Senator Thune knows the impacts that tariffs have on our everyday lives, and we hope he supports the Bicameral Congressional Trade Authority Act that will make it harder for levying these unfair taxes on Americans. We continue to support solutions that remove trade barriers and prioritize providing Americans with lower prices, more jobs, and bigger paychecks.”

Recently, Governor Noem spoke out about the devastating impacts the trade war has had on South Dakota.

Americans for Prosperity has released the following on the topic of trade: