LINCOLN, NE – Americans for Prosperity-Nebraska (AFP-NE) today launched a statewide digital campaign urging Nebraskans to oppose the Appropriations Committee’s proposed state budget. The ad directs Nebraskans to a digital tool that connects them with their legislator and enables them to voice their support for a more fiscally responsible budget that includes tax relief. 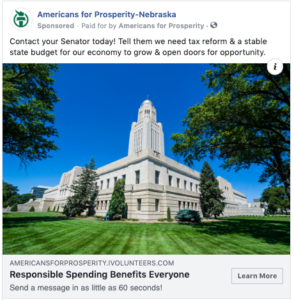 “Our government should live within its means, as families throughout the state do. This budget misses the mark by not limiting growth of government and prioritizing tax relief,” said Jessica Shelburn, AFP-NE State Director. “We are connecting Nebraskans with their legislator and making sure their voice is heard that we need tax relief and a more fiscally responsible budget.”

AFP-NE to Legislature: Focus on Fiscal Responsibility in Budget, 5/8/19