Daniel Garza, President of The LIBRE Initiative, a sister organization of Americans for Prosperity, shared our concerns on irresponsible state bailouts with President Trump. In response, the president shared similar concerns and said “we’re not looking to bail out states that have been run horribly for 30 years.” Watch a clip of the conversation here.

Tim Phillips, President of Americans For Prosperity, and Daniel Garza, President of The LIBRE Initiative, released the following statements on the president’s response:

“President Trump recognizes that the last thing Americans need right now is trillions in additional spending that would only bail out irresponsible policymaking that existed long before this crisis. We look forward to working with President Trump to help spur recovery by clearing the way for people to get back to work safely and responsibly and creating an economy that works for all.”

“We applaud President Trump for seeing state bailouts for what they really are: an excuse to fund a partisan wish list and cover the irresponsible fiscal decisions made by states prior to the pandemic. Passing this bailout would be unfair to hardworking Hispanics – and all Americans – who would be on the hook to pay for this outrageous spending. We continue to stand ready to work with the president and lawmakers to ensure that we reject bad policy and support true solutions.” 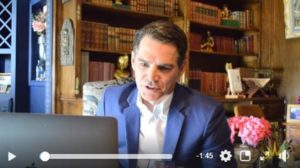