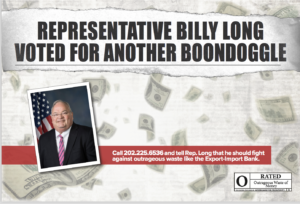 “Members of Congress who voted to allow the Export-Import Bank to continue to perpetuate fraud at the expense of Missouri taxpayers should be held accountable. The Export-Import Bank has demonstrated a pattern of mismanagement and political cronyism that favors special interests. Moving forward, we will continue to urge all members to work collaboratively to unrig our economy so all Americans have more opportunities to succeed.”