Tallahassee, FL – Americans for Prosperity (AFP) today announced a six-figure direct mail, digital, and newspaper advertising effort to hold accountable 15 members of Congress who recently in favor of reauthorizing the controversial Export-Import Bank (Ex-Im). AFP has consistently opposed the reauthorization of Ex-Im, citing the bank’s history of corruption and fiscal mismanagement that rigs the economy in favor of a few well-connected companies. 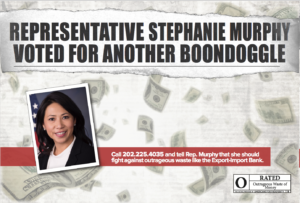 “If your member of Congress voted to give away billions of your tax dollars to big business and special interests, they need to hear from you. Ex-Im perpetuates the culture of cronyism and fraud that puts special interests ahead of hard-working Americans. Those members who voted in favor of financing risky taxpayer-backed loans for politically connected big businesses and wealthy foreign state-owned firms will be held accountable. We urge lawmakers to work together to unrig the economy so all Americans can succeed.”