HARRISBURG, PA – Americans for Prosperity (AFP) today announced a six-figure direct mail, digital, and newspaper advertising effort to hold accountable 15 members of Congress who recently voted in favor of extending the controversial Export-Import Bank (Ex-Im). Among the targeted members, Pennsylvania Congressman Brian Fitzpatrick was included for his vote to reauthorize the embattled institution. AFP has consistently opposed the reauthorization of Ex-Im, citing the bank’s history of corruption and fiscal mismanagement that rigs the economy in favor of a few well-connected companies.

“The Export-Import Bank has operated and enabled a culture of corruption taxpayers across Pennsylvania are tired of. Congressman Fitzpatrick should be held accountable for voting to prolong the gross mismanagement of taxpayer dollars and this ad campaign aims to do exactly that. Moving forward we urge all lawmakers to work together to unrig the economy so all Americans can succeed.” 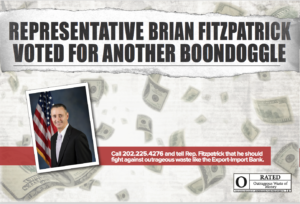