AFP-IN to Donnelly: Today’s the Day!

AFP-IN will now be taking its efforts on the road as the group kicks off its Unite with Kavanaugh Tour to have conversations with communities across Hoosier country to urge them to contact Sen. Joe Donnelly before it’s too late. The tour features a “Kavanaugh Caravan” vehicle marked with a phone number that lets Hoosiers call Sen. Donnelly. AFP-IN has been the leading advocate in the state for Judge Kavanaugh and its grassroots activists have already knocked on more than 12,835 doors and made more than 283,100 calls urging Hoosiers to call Sen. Donnelly and tell him to support Kavanaugh. The group has also deployed several rounds of direct mail and digital advertisements to supplement the grassroots effort. 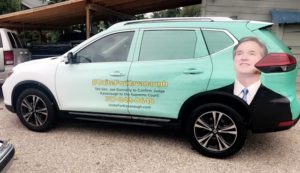 “Now that Judge Kavanaugh’s hearings have concluded, Hoosiers know with even more certainty his fitness for the Supreme Court and we encourage Sen. Donnelly to announce his support for the nominee forthwith. Donnelly has had ample time to consider his choice and we are hopeful he breaks from the partisan antics and obstruction that have come to define the actions of too many of his colleagues.”

Sen. Donnelly met with Kavanaugh in August and said after the meeting that, “Hoosiers rightly expect careful and thoughtful consideration of a nomination to our nation’s highest court, and I plan to keep doing my homework and make a decision sometime after Kavanaugh’s committee confirmation hearing.”

As part of the group’s campaign to confirm Kavanaugh, AFP-IN has:

Below are examples of the media coverage the chapter’s ground efforts have received: