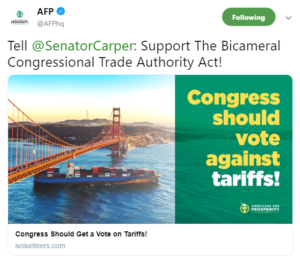 “Tariffs add an unfair burden and unwarranted tax to Delaware’s residents and economy. Senator Carper has an opportunity to protect Delaware from the harms of some tariffs by supporting the Bicameral Congressional Trade Authority Act. We urge Sen. Carper to seize this opportunity to protect Delaware and support removing unnecessary trade barriers through this bipartisan legislation.”

For an example of real-life impacts of tariffs in Delaware, view Trade Builds America’s Tariff Testimonial page here, which includes a direct example of a business in Wilmington.

Americans for Prosperity has released the following on the topic of trade:

For further information or to set up an interview, reach Nicole Tardif at NTardif@afphq.org or (571) 329-0161.