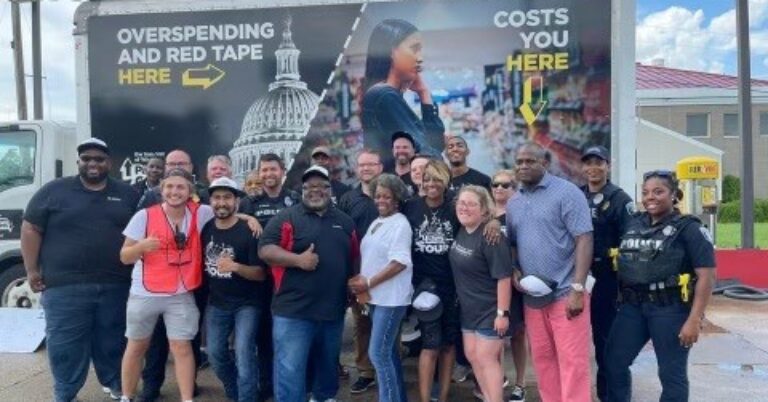 Imagine working for years, retiring, and then not being able to fully fill up your gas tank because of historic inflation. Americans have been forced to make difficult choices because wasteful government spending is driving consumer prices to historic levels.

Over the past several months on its True Cost of Washington tour, Americans for Prosperity has offered relief to drivers by dropping the price of gas back to $2.38, the cost of a gallon of gas when President Joe Biden took office.

FOX 16 interviewed Marla McDaniel, an Arkansas resident who came to a tour event in Little Rock and was able to fully fill her gas tank for the first time in a year because gas was more affordable.

Along with hundreds of other Arkansans, Marla also had chance to air their frustrations — and to demand action to cut wasteful government spending.

Some of these residents make their living hauling goods to grocery stores, medical supplies to hospitals, and goods to trade to the nation’s ports and exports. Others run small businesses.

Heather herself operates a small business that requires her to drive to meet with clients. She was able to get 25 gallons of gas for just $60.

Another patron, Kevin, filled up his 32-gallon tank for just over $74. Kevin said he normally pays about $138 every time he goes to the gas station, a chore he has to do twice a week.

Lines for the event stretched all the way up the interstate off ramp. In two hours, AFP helped more than 100 customers beat the effects of inflation.

Little Rock residents were not only treated to lower priced gasoline at the True Cost of Washington Tour event. AFP also gave away free haircuts.

FREE HAIRCUTS!!! If you are in the area come to Pop’s Barber Shop, 301 S. Main St., Pine Bluff, AR where AFP is giving 150 FREE haircuts to students K-12 starting at 9:00 a.m. Learn what Washington can do to help our families at https://t.co/WoL4B3M1P4. #arpx #paymoregetless pic.twitter.com/kT6I4XxpLo

According to local NBC affiliate KARK, hair salons are just some of the businesses that have been hard hit by inflation. One salon owner explained the price of aluminum foil, which is used to highlight hair, had jumped by 20% alone.

That owner tried to absorb costs, but eventually was forced to raise consumer prices.

When asked what Washington lawmakers could do to help people like himself, retiree Mr. Brooks said, “Cut out the propaganda. … Drop the prices, you can do it.”

Mr. Brooks recently retired, is on a fixed income, and has been unable to fill his gas tank this summer. Washington can help by releasing energy abundance, reducing unnecessary regulations, and unleashing innovation to reduce the increasing cost of living. #arpx #paymoregetless pic.twitter.com/95HADP7Fwi

Ryan Norris, director of AFP-Arkansas, explained to FOX 16 that True Cost of Washington tour event stimulated discussion among residents about the causes of high inflation. “Everywhere that you turn you have a conversation with Arkansans about the price of living,” said Norris.

Inflation has impacted all of us. If you’re in the area come down to Doug’s Also Gas Station, 5600 Zero St., Fort Smith, AR 72903 for $2.38 per gallon gas (Regular Gas, no ATVs, boats, or gas cans). Follow the tour at this link https://t.co/yLVnrknQJv. #paymoregetless #arpx pic.twitter.com/9I8eU0H5Qy

Since AFP’s True Cost of Washington Tour began in April, AFP has been meeting with Americans to offer solutions that would immediately lower the cost of living in the United States. These ideas include:

Join the movement to lower the cost of living in America today.